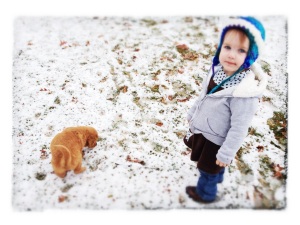 So much resting on these golden little shoulders.

First of all, sigh….I can’t even handle her cuteness.  Seriously.

It’s been a long time since I’ve allowed myself to go gaga for a dog.  For those of you who know me, you know that I used to have three dogs.  Three, yes, three.  When I was 5 months pregnant with Evie, my dog, Aristotle got sick.  He was only 4 years old.  He had an acquired shunt in his liver and they couldn’t do anything about it.

So I ended up trying to give him the very best last few days of his life–to let him go out guns blazing.  And when it was clear his guns weren’t blazing anymore, it was really clear.  I bargained, begged, and pleaded with a god I didn’t even believe in for him to be healthy.  And I took him to the vet in the middle of the night and held him as they euthanized him.

I didn’t take the moment alone with his body that they offered.  I just turned and left.  And I cried, and I cried, and I cried.  And in my head I knew I would never be able to be happy again.  My husband had the foresight to put away his pictures and his things.  And I instructed him to call anyone that might be tempted to mention his name, not to.  Not to offer sympathy.  No.  I couldn’t handle the mention of him.  He was already occupying my every thought.

As it turns out, I could be happy again.  But I am not being dramatic when I say that something changed inside of me and I emotionally withdrew from my other two dogs, Molson and Jacob.  Slightly, but I did.  It is amazing how we instinctively protect our organs–including the emotional barriers we put around our hearts.

So back to Mae Mae.  She reminds me of Aristotle in looks.  So, so much.  There is a good five years to cushion the pain but my heart still hurts a little when I catch a glimpse of him in her.  But I also remember how much joy there is in loving a dog.  And I want that joy for my children.  And for myself, again.

I have lofty hopes for Mae Mae.  Not only that my heart will finally mend from the loss of my Aristotle.  But that she will become Evie’s service dog.

We are going about things unconventionally.  Of course, that’s how we roll here.  We are raising her and training her ourselves rather than waiting for years on a waiting list to get a service dog.  Of course, this means Mae Mae won’t necessarily have the stuff it takes to become a service dog.  And we are totally okay with that as she is already a lovely part of our family.

Maxine is borderline obsessed with Mae Mae.  As in, individually feeding her each kernel of dog food.  One.by.one.  As in, holding her little fluffer head and bending down to kiss her.  Heart melts.  As in, laughing hysterically and pointing at just about everything Mae Mae does.  She is not so fond of the puppy nipping and scratching but we are working on that.  Maxine has been saying “don’t bite” CONSTANTLY and over and over again.  Even when Mae Mae is tucked behind the chair taking a noozer.

So little Mae Mae is settling in so nicely and nudging her little way into our hearts.  There’s just something so magical about having a puppy and watching my girls with her is more fun than I could have ever imagined.  Welcome Mae Mae!