****All images in this post should be accessible and coded with alternative text.  Please let me know if you have difficulty.

Auditory processing refers to the way that sound is processed after it is heard. A person with Auditory Processing Disorder may have difficulty interpreting sounds they hear–often related to speech. The structure of the ear can be typical while the person experiences varying degrees of difficulty making sense of the sound.

It is important not just because it affects communication abilities but because it can lead to extreme frustration and other emotions which can result in unexplained behavior.

Auditory processing difficulties.  I don’t know why there is not more of a focus on this as a frequently occurring disability secondary to Autism.  In my experience it doesn’t even seem to be on the radar of most professionals.

I will share our diagnostic experience and then some really important things that Autistic adults shared with me about APD.

Special thanks to H for sharing his images.
Read more at Thirty Days of Autism.

images from “Dear Teacher: A letter from H” of Thirty Days of Autism

Our experience getting Evelyn diagnosed:

Evelyn “passed” her newborn hearing test.  When she was about three, we started to notice that she didn’t seem to hearing when we talked to her.  We wondered if she was experiencing hearing loss and had her tested again–even though we noted that she heard other noise.

She “passed” the screening again.  Her neurologist thought it was worth having an ABR hearing test.  This is done under sedation in young children and tests the way the hearing nerve responds to different sounds.  She “passed” that too.

images from “Dear Teacher: A letter from H” of Thirty Days of Autism

After she “passed” that, we were lead to believe that she was simply ignoring us.  That this was a behavior.  That it needed to be corrected…ABA was apparently the only way to do it.

Fast forward to last school year.  Evelyn was seven.  I went away for several days which I don’t normally do so it was a big deal.  When I came back, Maxine met me at the door and we had a loud greeting.  Evie was sitting on the couch playing with her ipad.  She didn’t even look up.  I started greeting her excitedly.

She didn’t look up until I bent down in front of her and put a hand on her knee.  She didn’t know I was there prior to that.  I know this because the moment I touched her, she lit up, threw herself at me, and didn’t let go for several minutes.

She wasn’t ignoring me.  She didn’t process what she heard.

Because I knew nothing of the possibility of auditory processing difficulties, I had a difficult time wrapping my brain around what was happening.  We knew she could hear because she had all of the tests.

Over the next several weeks, I began “testing” her.  I would offer her something desirable.  She wouldn’t respond without a visual cue.  These were words that I knew that she comprehended.

I raised the question at a school meeting.  One of the people on her team responded that the team agreed that Evie didn’t seem to process language.  I was floored.  How had this not come up?  How was she not receiving accommodations for this?  They told me that only a neurologist could diagnose her with “central auditory processing disorder.”

We went to her neuro.  The diagnosis process looked like this:  I told him what we’d experienced.  He said she has Central Auditory Processing Disorder.  He wrote a letter to school saying that she needed accommodation around this disability.

When I think of the ramifications of our failure to detect this disorder, I could cry.  Not just the ramifications on speech, language, and academics.  But the assumptions everyone made about the function of her behavior and all the ways Evie was offended by those assumptions.  This was not Evie being stubborn. This was Evie being disabled in a way that no one seemed to acknowledge as worthy of support.

Lots of Autistic adults were kind enough to share their experiences around APD with me.

As I mentioned, a person could have perfect structural hearing and still experience APD.
You can read Alex’s blog here.

Imagine trying to process what someone is saying when every other sound in the room is competing with that speech.  You are unable to block out the other sounds enough to comprehend the speech.

It is important to note that auditory processing abilities are not static.  They can vary depending on the situation and day.

I would feel so incredibly frustrated if people attributed manifestations of my disability to behavior.

And then there are the people that presume that you’re incompetent.

Cynthia blogs at Musings of an Aspie. 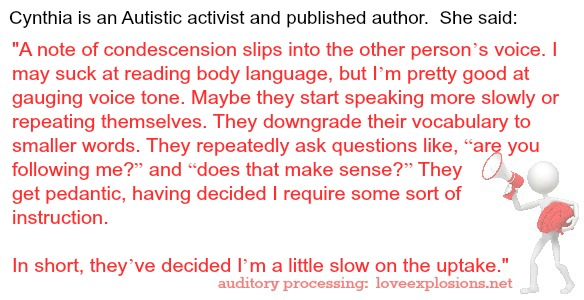 Every Autistic adult I spoke with seemed to experience some level of auditory processing difficulty.  It stands to reason that Autistic children experience the same.

Children might not have the ability to communicate this disability.  And it might be difficult for adults to pick up on because it is not necessarily constant.  And if the hearing tests come back “normal” and professionals don’t seem to be talking about it….

We are left with an unaccommodated ability which is often written off as behavioral issues.
And of course there is the frustration that is certain when a disability is not supported appropriately which could easily contribute to “behaviors.

Failure to diagnose and accommodate APD can lead not just to frustration, but to difficulty and/or failure to make academic progress.

Say nothing of the social implications.

Auditory Processing Disorder.  It is a thing for Autistic people–including kids.

Next post, I will talk about helpful coping strategies that Autistic adults shared with me.