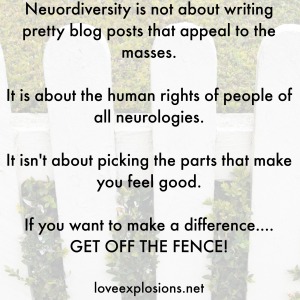 ne of the criticisms that is most frequently hurled at me by other parents of Autistic kids is that I judge people.  I freely admit that I do.  Often.  Constantly even.

But my judgments don’t come from a place of wanting to elevate my own self esteem as so many of these criticisms imply.  I am ever engaged in judgment of what will hurt or improve my daughter’s quality of life.

I’m not perfect.  I’ve done and said and written things which I know have been hurtful to my daughter and her Autistic tribe.  One of my greatest regrets is the fact that I spent so much time fighting AAC and trying to force my child to speak.  That cost her more than I will ever know.

The other criticism I get most often is that I am “PollyAnna” about Autism.  That I want to sweep the challenges my daughter and family face under the rug.  While I choose not to publicly share details which I feel could hurt my child or family, I do not ever deny that some things are really, really hard.  But I cannot think of any obstacles that could not be overcome by a shift in the way disabled people are supported, accommodated, and spoken about.

Recently, there was a stir caused by a very popular blogger’s comment:  “I’m also going to remind you that even in the midst of all the positivity, you’re not human if you don’t have moments where you wish to god your kid didn’t have to struggle and all you want to do is tell autism to f@%k itself. That’s the secret that no one will talk about. But it’s what makes us real, and it’s okay.”

Because my child is NOT the problem.  The problem is the way the world responds to my child.  And on the days that I struggle–the ways that I respond to my child.

Being a parent to ANY child is hard.  There are days when bedtime cannot come soon enough.  You don’t have to have an Autistic child to know that this is true.  Those are the days where I succumb to my human weaknesses.  I get frustrated.  I say the wrong thing.  I react the wrong way.  And my reactions make life harder–for my child and for me.

I judge people.  I do.  I also judge myself.  I’m responsible for judging myself and for doing better when I fail.

I’ve found that this responsibility isn’t always fun.  And it certainly doesn’t win me popularity.  But we can’t make things better if we don’t talk about the things that are wrong.  I’d love to write a blog which everyone loves and celebrates.  I would love to not receive hate mail.  I’d love to not rock the boat and be friends with everyone.  I’d love it if everyone would think that I am just the bees knees.  Because it isn’t fun when what you say and write is not popularly received.

But I love my child.  And I will stand out in the cold and rain for a lifetime if it means that she is spared even a moment of facing the elements.  Not because I am strong.  Not because I am brave.  But because I’m a mother.  And that’s what mothers do.

My child is more important than stroking the egos of other parents.  Every single time.

My child is more important than my desire to feel liked.  Every single time.

My daughter doesn’t have the luxury of riding the fence.  So I’m not about to climb up and ride it at her expense.

When someone kills their disabled child/children and our response is “this shows that we need more services,” we as a community are taking people with disabilities hostage. The implicit threat is “give us more help or the kids die.” Saying that parents are forced to kill their children by lack of services also destigmatizes child murder and excuses the parents’ actions. The truth is that plenty of parents raise children with disabilities under all kinds of circumstances, without killing or abusing them.

Service provision is so so very important but we CANNOT use child killing as a launching platform for advocacy on this issue. It will do more harm than good.”  Zoe Gross

The importance of the statement above, made by Autistic activist Zoe Gross, cannot be overstated.

Image is peach graphic with light pink peace sign. The text reads: ter·ror·ism [ter-uh-riz-uhm] noun the use of violence and threats to intimidate or coerce, especially for political purposes.

On April 3rd, Robert Robinson was murdered by his mother, Angie (who also committed suicide).  Robert was 16 years old and Autistic.

The conversation following the murder centered around lack of services and sympathy for the mother.  As it always does.  I can say always because this happens with enough frequency to warrant that language.

Why are we not collectively outraged that disabled people are being held hostage by those that are making terrorist threats?

That IS, by definition, what is happening.  A politically motivated group is making threats of further violence against a vulnerable group of people.  Disabled people.

It is tempting to negotiate with terrorists.  Especially when the threats of violence are credible.  And recent history has shown these threats to be quite credible.  But we know that submitting to this type of savagery opens the door to continued–escalated even– violent coercion.  Surrendering to those that use homicide as a negotiation tactic serves to reinforce this as a viable means of political gain.

Productive conversations by peace loving people do not begin with ultimatums of brutality. Not ever.  Parents that love their disabled children do not threaten to do them harm should their demands not be met.  People that value the lives of disabled people do not sympathize with the thugs that make such threats.  Nor do they use the violence already perpetrated by other parents as blackmail to achieve their objectives.

The most compelling argument cannot be entertained when it is dictated that the rejection of said argument will result in the intentional harm of other human beings.  Scores of parents to Autistic children are engaging in this type of threat.  By doing so, they are undermining what is, in many cases, a valid plea.

ALL Autistic people need more support and accommodation.  Caregivers need different and better supports than what is currently available to most.  (I would argue that what caregivers think is needed, in most cases, is actually contrary to their objectives but that’s a whole other discussion).  However, the murder of a disabled person is not a result of the failure to meet these needs.  The murder of a disabled person by a caregiver is an intentional act of hate.  Pairing it with a suicide does not make the perpetrator  more sympathetic, more understandable, or less hateful.  Attempts to make martyrs out of those that execute or attempt to execute (as we see being done with Kelli Stapleton), is consistent with the strategies that terrorists routinely employ.

I demand that my Autistic child and her tribe be treated humanely. And though standing up for human rights and social justice is of critical importance and is central to my beliefs, I haven’t once resorted to threatening violence if my demands are not met. How ironic, then, that those actively engaging in terrorist-style ultimatums and threats, consider me to be a part of some sort of radical fringe movement. Chew on that!